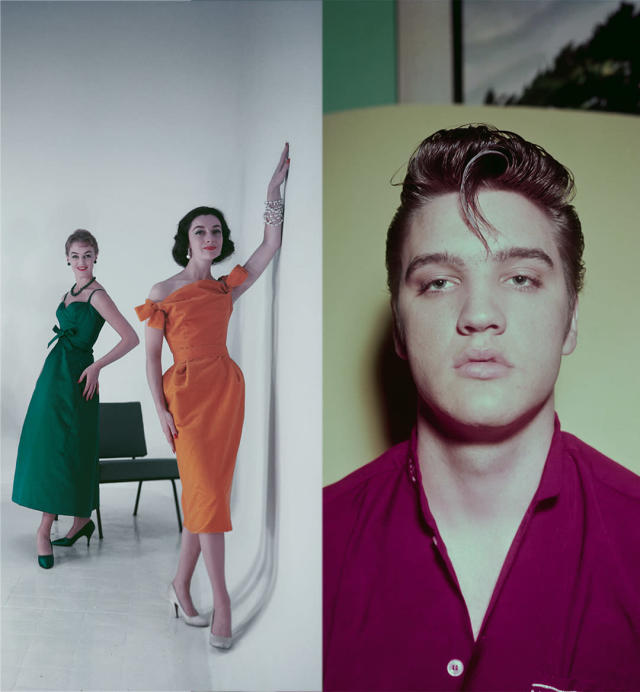 The 1950s was a time of wide circular skirts worn with layers of petticoats to add lift. These were used in both day and evening wear and generally reached mid calf. Petticoats were usually made of several layers of net and were starched for extra stiffness. In eveningwear, chiffon was used in a variety of vivid colours.

The 1950s were marked by a variety of men’s fashions. Shirts were made of different fabrics, and many had different prints and colors. Some were seasonal, like the Hawaiian shirt. Other styles were more traditional, like the button-up cardigan. Men wore a variety of coats and jackets, ranging from long to short, depending on their activity.

Men’s fashion during the 1950s was influenced by the general look of the era. While women tended to wear skirt suits and blazers, men were more conservative. Many young men wore suits, and letterman jackets were worn by school athletes. In addition to suits, a man’s clothing also included jeans and a white T-shirt.

The 1950s were also known for the tight waistbands in men’s pants. Pants that were too baggy were replaced with a slimmer, more fitted style. Men’s pants were available in a wide variety of fabrics and colors. Some pants were made of gabardine, rayon, or Dracon.

During the late 1950s, designers like Chanel began to influence the fashion world. Some of their designs featured open pockets to showcase a blouse. Previously, blouses were a necessary part of a suit, but the Chanel designs made them a major focal point. In addition, silhouettes began to become looser, and colors started to become more vibrant. Yellow, green, and violet were popular and even beige began to make an appearance.

The 1950s men’s fashion styles have become increasingly popular in modern society. Those reminiscent of the 1950s are a great way to make a fashion statement without feeling too dated. They can be both smart and relaxed, and they can even work for special occasions. It’s never too late to try one of these men’s styles.

The 1950s were a decade of innovation. Designers began creating one-of-a-kind garments and wearing them to high-profile events. They were attempting to break away from the traditional European style and showcase the unique style of the American man. For those who remember this era, you can appreciate the impact that this style had on men’s fashions.

Men wore business suits during the day and changed into more comfortable clothing at night. The 1950s brought about a booming fashion industry, with the popularity of casual clothing resulting in a wide range of colors and textures. Many of these pieces were made of synthetic materials, which made them easier to maintain. Choosing the right style of clothing is key to expressing your personality.

Work clothing in the 1950s was quite different than what we wear today. While the uniforms that most men wore were still largely the same, women’s work clothing had some unique differences. For example, work shirts were generally made of cotton twill and the trousers were made of dark denim. Work jackets were made from covert cloth or dark denim and were lined in flannel or wool. In some cases, they were even lined in shearling.

Women’s workwear from the 1950s developed from trends in the 1940s, largely reflecting the war effort. Many women were employed in factories to help the war effort, while many others worked in fields and farms. There were also brave women who served as nurses or in supporting roles on the battlefield. They were able to express themselves through the clothing they wore.

While men did not have many options in the 1950s when it came to color choices, they could still enjoy a sense of sartorial splendor. But they had to wait a little longer before they could fully reclaim their sartorial glory. During the 1950s, men wore a variety of conservative clothing to work, and the more senior they were, the more expensive their clothes had to be.

During the 1950s, many offices expected employees to wear business clothing. Unlike the workplaces of today, employers then tended to be more results-oriented and less concerned with style. But that doesn’t mean that employees didn’t have to dress to impress, though. The fashion choices of the 1950s are an example of how a workday wardrobe can reflect the personality of the wearer.

Women’s workwear from the 1950s was often dominated by the denim jumpsuit. Typically, these outfits incorporated a nipped-in waist and short sleeves. These outfits are not only stylish, but also functional. Most women wore them with flats or strappy heels for the workplace.

If you want to find a pair of 1950s women’s workwear at a low cost, you can try rummaging through the closets of elderly relatives. The clothes may be cheaper than thrift stores, but the quality is often worth it. Another option is to look online. Many online sites sell vintage workwear.

1950s fashion was marked by a lot of accessories. There were belts and scarves and the hair was always up and in the air. Hats were very fashionable as well, especially for women. The most popular hats were shell-shaped and were very small. Other popular hats were the Juliette cap, the Bicorne-Bonnet, and the Sailor-Coolie. Scarves were also an important accessory in the 1950s, especially during the winter season. In fact, many women tied their ponytails with short chiffon scarves.

Besides the hats, other accessories of the 50s included sunglasses. Spectacles with enormous wings studded with rhinestones were also popular during the era. The sunglasses often had green lenses. Some also had tan or dark grey lenses. The frames were sparkling with decorative patterns in the upper corners and arms.

Moreover, the 1950s fashion era had a variety of skirts. Women favored fitted jackets with peplums, a style of elongated hem which looks like a short skirt. The peplum skirt is still popular among women today. Pearls and gloves were also common accessories in 1950s fashion.

The era also marked a big change in the fashion world. Many new designers came to prominence outside of Paris, which had been the fashion capital for the West. This increased geographical diversity led to a larger variety of styles. New synthetic materials also offered fresh possibilities in mass-produced clothes. The demand for clothing was boosted by strong consumer spending and the advent of Hollywood film stars.

Women wore a wide variety of hats. Hats were rounded and often came in different shapes and sizes. Earlier, women wore hats that matched their outerwear. They also wore earrings, including clip-on and stud earrings. The 1950s also marked the birth of the pillbox hat.

Another popular accessory of the era were scarves. You can find these in thrift stores or on online auction sites. Scarves were used to cover the neck and protect the hair. They were also worn for warmth and to add flair to an outfit. So, when searching for vintage scarves, remember to look for ones with comfy handles.

Leather slippers also became popular in the 1950s. These were often padded and comfortable. Shirts were made of lighter material and came in bolder colors. Overcoats were often single-breasted and baggier fabrics. They had a richer color palette, with many different shades of brown being included in the fabric.

1950s women’s fashion was influenced by the ‘New Look’ by Christian Dior in the late 1940s. The clothing reflected a sophisticated mix of conservatism and glamour. The hourglass figure was the dominant shape of women’s clothing. Women emphasized their hips and bust in order to accentuate the hourglass figure.