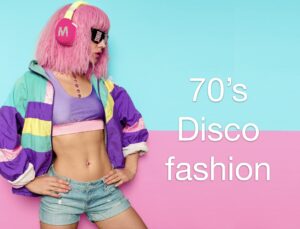 There’s no denying that disco was hot in the 1970s, and disco clothing was not just for the young. It was a time of vibrant colors, neon prints and athletic attire. Golf shirts, striped rugby shirts and velour sweatpants were popular, and men could even wear muscle shirts. Men were even allowed to wear velour sweatpants if they were going to the roller rink. Women could wear terrycloth tunic dresses and metallic sweatpants.

Psychedelic prints are a fashion staple that harkens back to the flower child culture of the late 1960s. This esoteric motif was worn by millions of people who embraced the hippie and spiritual aesthetic. While disco aesthetics soon followed, the psychedelic trend remained popular and evolved into a fashion trend for the modern day. Today, big name designers have reintroduced psychedelic prints into their collections, bringing a new sense of fun to the psychedelic look.

The psychedelic movement was influenced by op art and oscillating geometries, two styles of art that challenged the boundaries of visual perception. It also recalled surrealist art, which evolved into pop art. In a way, psychedelic fashion became a statement of cultural activism.

This trend has been making a strong impression among the influencer crowd this season. Among other styles, printed pants and co-ords are particularly popular. With the help of Pinterest, 70s prints are starting to infiltrate the mass market. For example, Motel has featured 15 of its “70s Ripple” printed products 12 times in the last two weeks. Ultimately, this trend is expected to grow even more in the coming years.

Psychedelic prints became extremely popular in the 70s. The 70s was a time of political unrest and dissatisfaction with the government, but it was also a period of great fashion. The psychedelic prints and flared pants of the decade were widely worn and helped usher in the disco era.

The psychedelic print has made a comeback in fashion since its first appearance in the 1960s. Its resurgence is being attributed to social movements and a new appreciation for glitz. This is a time when women are free to express their individuality.

Metallic dresses are one of the most iconic styles from 70s disco fashion. They can be found in a wide variety of colors and are often created by top designers. One of the most popular 70s disco designers was Diane Von Furstenberg. Her slinky wrap dress became a hit with the disco community because it was sexy and friendly to all ages. Another legendary disco dress designer was Roy Halston Frowick, who used glittering materials and flowing chiffon to create his stunning designs. His creations added an elegant look to the dance floor.

Metallic dresses are a great way to relive disco fashion in a modern context. Metals were used in disco costumes to reflect the strobe lights from disco balls, so these dresses tended to have exaggerated sleeves and a high hem. A silver ’70s disco dress is a contemporary take on this classic style. A short hem is offset by long sleeves, which give the look a feminine and stylish spin.

70s disco fashion was also influenced by tie-dye and crochet. These styles lent themselves to boho-chic looks and were often considered feminine and romantic. Whether you are looking for a unique Halloween costume, or a chic dress for every day wear, this retro style will give you that retro look you’re seeking.

Flared pants have come back to life in the fashion world. These 1970s staples came in a variety of colors, materials, and prints, and were worn with halter tops, satin polyester, and corduroy. Flared pants were comfortable and perfect for the disco. In the past week, celebrities such as Kaia Gerber, Nigella Lawson, and Claudia Winkleman have all been spotted wearing flared pants.

Flared pants were very popular in the 1970s and even John Travolta wore flared pants in the movie ‘Saturday Night Fever’. The 70s disco era was characterized by a mix of styles, including glitter and flamboyant clothing.

Platform shoes were a major fashion trend in the 1970s. Popular among men and women alike, these shoes featured high, chunky heels and platform soles, perfect for hustling across the disco floor. While the 1970s disco scene was the most iconic decade for platforms, they actually have been around for centuries. Platforms were first used in ancient Greece by Greek actors to elevate important characters, and they were even used during the Middle Ages to keep feet dry. Marlene Dietrich was one of the first women to wear a modern platform shoe. However, it didn’t reach the mainstream until the 1970s.

The platform heel was originally worn in Ancient Greece by Greek theatre characters to increase their height. Later, Europeans used them to avoid the rough pavements of the city. By the 1970s, they became popular in the United States, where they were popular during the disco era. Platform heels are popular among women because they add height and are more comfortable than traditional high heels. There are a variety of materials available for platform shoes.

Women’s 1970s disco fashion was influenced by punk styles and glam rock styles. Hippie sandals, platform shoes, and velvet slip-on booties became popular during the decade. The decade also saw the birth of rhinestone cowgirls, flower girls, and disco queens. Many of these fashions have remained popular to this day.