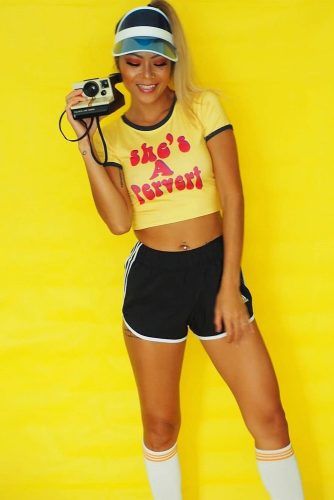 For those of you who have grown up in the eighties, you probably remember the style and looks that were popular in the eighties. Remember Acid-washed jeans and oversized tops? Or how about the MC Hammer fashion? The 80’s have inspired many new styles and trends in fashion today. These are the styles, brands, and looks you’ll want to take note of. These will help you recreate those looks from the 80’s and bring back memories of your own youth.

Mesh tops were a popular fashion item in the 80’s. They were often worn over a bra for girls and a shirt for boys. In the 80s, many styles were derived from sports and exercise clothing. In the 80s, sports and fitness were viewed as a way to stay in shape and look good.

Mesh tops made their fashion debut in the 80’s with Madonna, who made a statement wearing one in her music video “Lucky Star.” In addition, women started wearing fishnet tops during the punk movement and many of the fashion icons of that time adapted these styles.

Fashion was heavily influenced by American pop culture, including music videos and American TV shows. Many people wore neon and other bright colors and accessories. Some people also wore legwarmers. The popularity of these styles was also reflected in other styles, including large finger rings and neon shoelaces.

T-shirts were another hot item of 80s fashion. A t-shirt with political slogans was popular. Several big companies saw the potential in these items and began producing them. They could be printed with a logo, a letter, or even a plain color. They were an essential part of the 80s wardrobe and complemented both jeans and leggings.

The oversize trend is back, and it is a great way to experiment with your favorite fashion style. Oversized tops go well with midi and long skirts and are a flattering style for tall and skinny girls. Oversized pieces also go well with heels. Just make sure to pair them with the right bottoms.

The ’80s were also the era of cut-out sleeves. These cut-outs could be found anywhere along the sleeve, but were most commonly in the shoulder area. Today, you can buy a contemporary version of this ’80s fashion trend, or you can make your own by taking the shoulder material off of an ’80s blouse.

The ’80s were the ‘Decade of Greed’. It was a great time to be alive, as pop culture and consumerism had just begun to flourish. The fashion of that decade was vibrant and flamboyant. Bright colors, colorful accessories, and fluorescent makeup were a huge part of 80’s fashion.

Acid-washed jeans were a hot trend in the eighties, but they aren’t likely to come back into style anytime soon. The style was popular with teens and young adults in the 80s and 90s, but many parents were a bit hesitant to buy brand-new jeans that looked old. The acid-washed jeans trend was made popular by surfers, who wore denim that was bleached by seawater, giving them a worn-out look.

Acid-washed jeans were often blue, but big brands eventually added black and gray washes, giving people more options. One of the most popular variations was the “inverted acid wash,” in which light or white jeans were splashed with blue tones. The style eventually spread to other garments and fashion accessories.

The process of acid-washing denim is fairly easy and can make a plain pair of denim look a lot cooler than its untreated counterpart. Acid washing strips the top layer of color, leaving the lower layers of denim white. It can be done in an overall pattern or in splotches. If you want to try it yourself, you can check out the instructions at the bottom of this article.

Acid-washed jeans were also popular with rock and heavy metal bands. This trend inspired a wave of limited editions and brand collabs. Acid-washed jeans and fringe jackets were extremely popular, and many fashion companies created limited collections to capitalize on their popularity. Also popular in the 80s were legwarmers, spandex tights, and leather jackets. Acid-washed denim also became popular with men and wore polo shirts and turtlenecks.

MC Hammer is one of the most iconic rap stars of the 80’s, and his fashion choices harken back to his early days. In 1980, he was just a high school student when he started touring in clubs and discos, and by 1990 he had secured a record contract. By the end of the decade, his songs had sold over eight million copies, and he had become a superstar. In addition to his music, MC Hammer’s flamboyant dance moves and extravagant fashion choices helped cement his place in 80’s fashion.

MC Hammer’s outfits during this decade were influenced by hip-hop music. In addition to being an influential figure in the fashion world, MC Hammer’s psychedelic t-shirts and pants were the perfect choice for Hip Hop dancing. His pants were also metallic and bright, which fit the era’s perception of excess. As a result, his fashion choices became a trend in the streets.

As a result of Hammer’s fashion choices, parachute pants became a popular item of clothing during the 80s. These pants were unique among other pants, and were often referred to as MC Hammer Pants. The popular rapper wore these pants during his music videos. They were also an iconic part of 80s fashion.

In addition to the clothing, 80s fashion featured plenty of accessories. Big hairstyles and shoulder pads were common, while neon colors and neon patterns were prevalent in accessories. The popular trend for accessories included plastic bangles, mesh accents, and oversized funky earrings.

Jheri Redding, a pioneer in hair-care products and 80’s fashion, is a hairstylist, chemist, and businesswoman. She’s best known for creating the famous Jheri curl, and is credited with developing the modern hair conditioner. Her innovative ideas led to the creation of many beauty products, including hairsprays, conditioners, and styling creams. In addition to her successful career as a hairstylist, Redding founded an international company that continues to develop haircare products and hairsprays.

The ’80s brought with it an explosion of colors and hairstyles. One of the most prominent was the Jheri curl, which was popular among African-Americans during that time period. Eventually, this hairstyle was copied by pop star Michael Jackson, and it became an enduring ’80s fashion trend.

Jheri Redding had four wives. In addition to his first wife, Angie Redding, he had four children. The couple had a son, Steven J., who later married a woman named Lisa Marie. Both of them were successful entrepreneurs, and they had many children.

Jheri Redding’s hairstyles were popular in the 1980s. The Jheri curl was a popular hairstyle in the 1980s, and it became a cultural staple. Developed by Redding, the Jheri curl is an application of curling agents to black hair. The chemicals softened the texture and held the curls loose. The process required daily use of an activator.

In addition to her hairstyles, Jheri Redding’s name became synonymous with hair care. Her hairstyle, the Jheri curl, was named after an Irish immigrant. Redding’s hairstyle was a two-step process, resulting in loose, shiny curls. She was also the creator of the modern hair conditioner and introduced vitamins into hair care products.