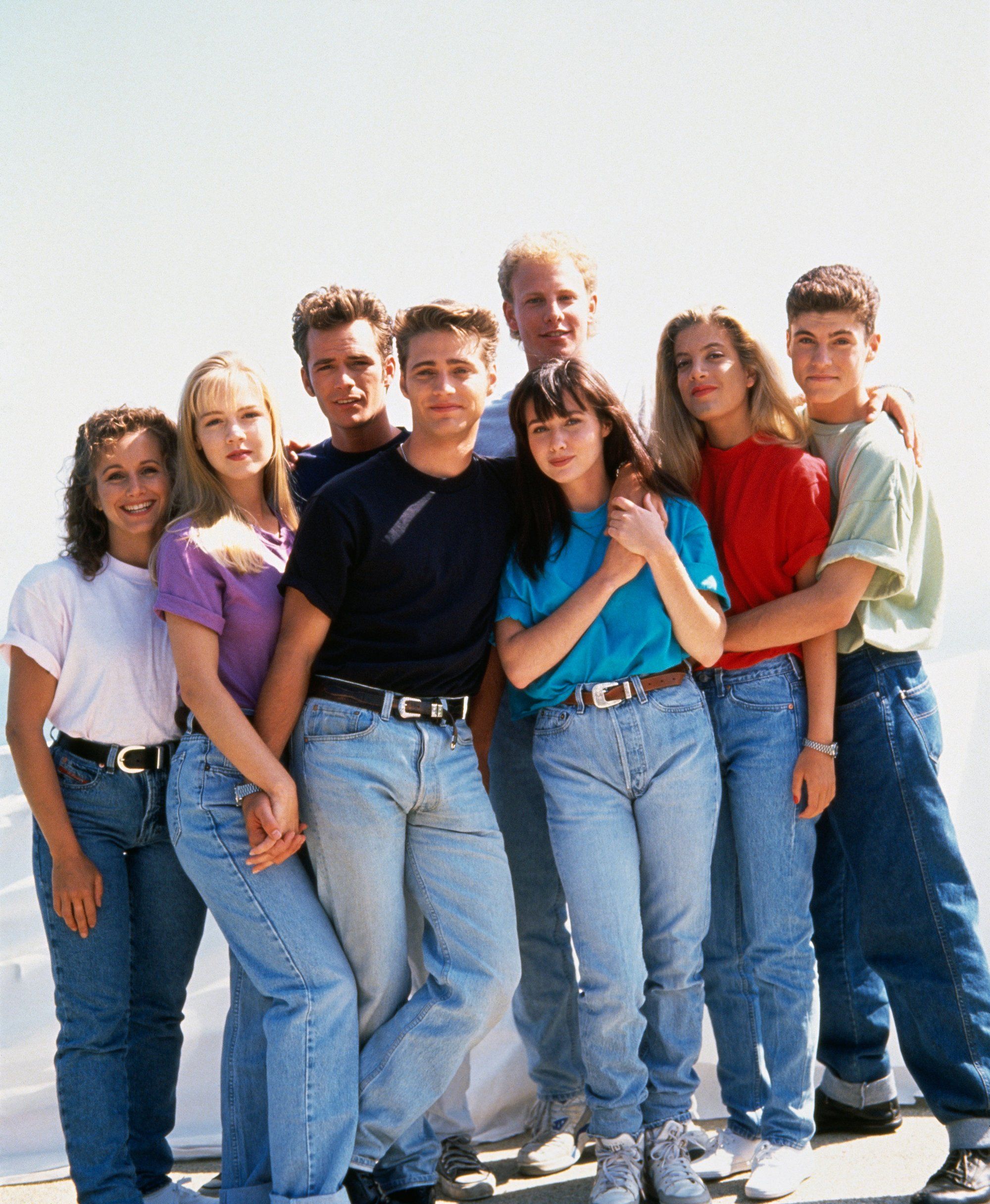 Whether you’re a kid or an adult, you probably remember the trends of the 90s. These include Black combat boots, Acid-wash jeans, and Colored jeans. But there’s a lot more to 90s fashion than that! Here’s a look at some of the iconic 90s pieces you can wear now.

With the 90s fashion resurgence, babydoll dresses are making a comeback. These classic frocks are perfect for any occasion and pair well with a variety of accessories. They also make the perfect choice for the winter. The off-white color of these dresses makes them a great choice for the season.

These dresses are still highly popular among the fashion set, and you can find these designs from designers such as Cecilie Bahnsen, a Danish label that prioritizes comfort, minimalism, and effortlessness. Another designer that is making these dresses popular is Molly Goddard, a London-based designer who has gained recognition for creating doll-like, high-volume dresses.

This style is often associated with celebrities, and a modern version of this look is still in vogue. Similarly, the bomber jacket, which was originally a schoolgirl style, became a classic cover-up that looked just as chic as a top. And since Cher Horowitz rocked this look in the movie Clueless, high-fashion brands picked it up and created a trend that continues to this day. In addition, the trend of wearing sheer socks with loafers became extremely popular. The 90s were also the decade for chunky leather chokers, which were the ideal form of punk expression. Chokers, which were originally used by punks, were later refined to become more sophisticated.

The decade also saw the emergence of body con dresses. This style combined the popular mini skirt trend with the trend for tighter clothing.

Combat boots are a versatile item and can be worn during any season. In the spring, they look fantastic with a long dress with a statement collar. You can add a black leather belt and a top-handle handbag for a chic look. Shorts are another good option for this style. You can wear denim shorts or black leather shorts with combat boots.

These shoes were a huge hit during the 90s. The most popular brand was Dr. Martens, also known as Docs, which was popular with both celebrities and teenagers. These boots were very comfortable and came in various colors and styles. They were paired with a lot of teen clothing and were also worn by Pearl Jam and Nirvana.

Black combat boots are also a great choice if you want a simple and classic look. These boots come in a variety of colors, and if you want to wear them with a lot of outfits, neutral colors are the way to go. However, if you want to be different, you can add a pop of color by choosing a different color.

The ’90s were the decade that gave us many of the latest fashion trends. These styles included leather blazers, mom jeans, vest tops, and varsity jackets. Today, celebrities like Kourtney Kardashian and Billie Eilish are channeling the ’90s spirit with their own twists.

The ’90s were also a time of grunge fashion. This style gave clothing an edgy edge and continued through the decade. Fashion was influenced by hip-hop music and the new gangsta style. Tight-fitting tops and leggings were also popular.

The ’90s were also a time of sexy, ethnic clothing. A new sleeveless style called a halter neck, tied behind the neck, was a big hit in the 90s. Denim shorts were worn by men and women alike.

Colored jeans were a major part of 90s fashion. Many popular fashion icons, including Madonna and Kurt Cobain, were wearing these styles. Many of them were high-waisted, medium stonewashed, and featured bold colors. Men’s looks were also influenced by gothic and industrial rock styles. The trend of wearing a trench coat was also popular among men after the Matrix movie came out.

Acid-wash jeans made a comeback, regaining popularity after a decade away. These jeans have their origins in the surf culture of the 1960s and ’70s. The technique, which involves the use of acid, sprayed on jeans, gave them a lived-in look. They were soon copied by the punk scene, and the first pair of pre-washed acid-wash jeans was released by Guess in 1981.

Acid-wash denim can also be paired with a white t-shirt or tie-dye top. According to Fashion Makes Trends, pairing a trendy piece with a classic staple can give your outfit a timeless feel. Wearing acid-wash jeans with a white button-down shirt or pencil skirt can also work.

Capri pants are not a new trend, but the design dates back to the 1940s. A cropped close-fitting trouser, the capri pant was introduced by German designer Sonja de Lennart. After the war, she visited the Italian island of Capri and was inspired to create the trendy trouser. Before the invention of the capri pant, women in public were not permitted to wear trousers, and women could be arrested for wearing men’s clothes.

In the 1990s, capri pants became a popular clothing item for young women. They paired well with platform flip flops and thin strap tank tops. Spaghetti strap tank tops, on the other hand, were scandalous. However, the popularity of capri pants was short-lived.

Throughout the ’90s, many young women wore colorful shirts, including colored jeans. These jeans were available in shades of red, green, and purple. In addition, many women wore metallic Spandex leggings, drainpipe jeans, and colored tights. These trends were popular over plain pants.

The ’90s were a confusing time for fashion. From ankle-bearing capri pants to colorful scrunchies, the ’90s reflected the coolest of the cool. The ’90s spawned several trends, which are now making a comeback in the world of fashion.

One of the most beloved 90s fashion trends has endured through the years: jelly shoes. With a new ‘Icons’ campaign, a Brazilian heritage brand is highlighting its most famous creations. These retro-inspired shoes are easy to pair with a range of different outfits, and are especially appropriate for office wear. To achieve the best effect, it’s important to break in your new shoes, and remember to wear socks when wearing jelly shoes.

These iconic 90s footwear styles can be found from a number of luxury designers. The Prada brand has a wide selection of jelly shoes, while Sam Edelman and Urban Outfitters also carry a variety of options. These shoes are often updated by adding a platform or slide silhouette and embellishments. Many celebrities, including JLaw, wear fisherman-style jelly shoes, and they can be found at a range of price points.

A number of brands have revisited the 90s fashion trends this season. These include the iconic platform flip-flop. Rocket Dog, for example, collaborated with Gwyneth Paltrow’s stylist to bring back the style.

Backward hats were made popular by popular hip-hop artists during the 90s. The backward hat style was adopted by athletes from other sports and spread to the fashion world. Today, celebrities and average consumers continue to wear backward hats. Whether it is a baseball player or a soccer player, backward hats continue to be a popular fashion trend.

This trend began in the 1990s with celebrities, such as Ken Griffey Jr. and rappers, and was quickly picked up by the general public. The hip-hop community, in particular, was influential in spreading the rebellious and questioning message of the backward hat.

The 90s were also a decade of spiky haircuts. The trend was made even more unique with the inclusion of piercings and bleached hair. The ’90s also saw a resurgence in the popularity of crepe-soled shoes. One such sneaker was the Clark’s Wallabee, which re-emerged in the ’90s after becoming popular with Wu-Tang rapper Ghostface. The sneaker was made available in three exclusive colorways.

Snapbacks are also back in style. The hip-hop generation wore them as part of their street style. They were a popular fashion trend during the 90s, and hip-hop icons such as Aaliyah and Ice Cube wore them. Rappers were also the biggest fashion influencers of the decade, and hip-hop fans copied their looks and accessories.