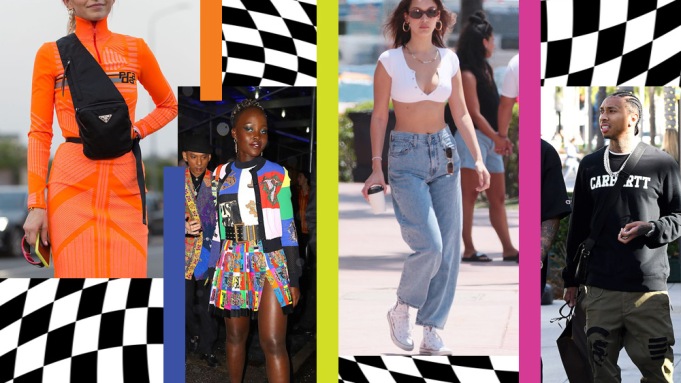 When it comes to 90’s fashion, there are several items that are not only timeless but also highly functional. Some of these are High-rise jeans, Cargo pants, Tracksuits and Logo sweatshirts. These are great ways to stay warm and look cool. These trends are now available in a wide range of styles and colors.

When buying a pair of 90s style jeans, make sure you get the right fit. Straight jeans hug the waist and hips, while wide-leg jeans hug the thigh and ankle. Flare jeans are shorter than straight jeans and feature a narrower knee and wider ankle. High-rise mom jeans are another style that has a tall waist and tapered ankle. They’re perfect to wear with a pair of vintage sneakers.

The best high-rise jeans vary in fabrication, wash, and silhouette. Straight-leg jeans and skinnies are versatile, while skinnies with no distressing look good on a dressy day. Flares and crops offer a more trendy look and are perfect for summer.

The style of cargo pants has been making a massive comeback recently. Inspired by military dress, they are popular for their baggy appearance, drawstring waists, and khaki colour palette. These pants were a staple in 90s and early 2000s wardrobes, and they were worn by stars from the alternative scene, such as Pink and Avril Lavigne. They also made an appearance in Destiny’s Child’s 2001 video, “Survivor.”

The first Cargo Pants were worn by British paratroopers after the Second World War. Later, they became a part of the U.S. uniform, and their dual pocket design was adopted by all branches of the military. By the end of the war, surplus military clothing began trickling down to the public.

Cargo pants first made a comeback in the 90s, when rappers and other hip-hop artists took to wearing them. By the end of the decade, cargo pants were available just about anywhere. They were typically made of synthetic fabrics, which dried quickly and handled outdoor activities well. Cargo pants were often accented with oversized belt loops and felled seams. The most popular colors during this time were grey and tan.

The 90’s trend is gaining popularity among celebrities. Kate Middleton, Gigi Hadid, and Kendall Jenner, for example, have worn cargo pants. They are also popular among the Gen Z crowd.

Tracksuits are a classic 90s sportswear piece that can be worn in a number of ways. Originally designed for athletes, tracksuits are now available in a wide range of fabrics, colors, and styles. Even high-end fashion brands have gotten in on the trend.

Tracksuits have come back into fashion after years of being out of style. The velour material was popular during the ’80s, but it went out of style in the 1990s. The velour trend has made a huge comeback in the 2000s and beyond, and many celebrities including Jennifer Lopez have reintroduced the velour look into their wardrobes. Many brands have also reintroduced this 90s fashion staple, including White Mark. The new line offers eight different colors and comes in plus sizes.

The trend was made famous by colorful sporty tracksuits. Now they are back as part of the athleisure movement. These track pants often come with side buttons, which can be undone for a more sassy look. Another 90s fashion staple was denim overalls, which are making a comeback in a more sophisticated version.

If you’re looking for a nostalgic piece of clothing, 90s logo sweatshirts are just the thing. These hoodies are expertly printed and sweatshop-free, and are available in a wide range of styles, colors, and sizes. To get the perfect fit, it’s a good idea to order two sizes larger than you normally would.

Whether you’re a die-hard 90’s fan or just want to add a throwback look to your wardrobe, bandanas are an easy way to add a 90s twist to your look. This stylish accessory can be worn with almost any outfit. Unlike hair clips or other accessories, bandanas add a chic, effortless element to your look.

Bandanas can be worn as a headband, as a cowboy tie, or tied to a handbag. This stylish accessory will instantly add a cool element to any outfit. Plus, it’s versatile enough to go with any hairstyle. Even celebrities like Chrissy Teagan and Pia Mia have been seen in bandanas!

The bandana was originally designed to be a sign of gang affiliation. Later, it was worn as a symbol of sexual inclusion. The 90’s saw a slew of trends involving bandanas. As a result, they quickly became a popular accessory.

These shorts, also known as ‘jorts,’ are a summer staple. Despite their controversy, they’ve been a classic style for decades. The shorts are now back in a big way, thanks to Billie Eilish. Whether you’re looking to get back into the 90’s fashion trend or you just want to get some retro vibes, denim shorts are for you.

Denim Bermuda shorts are an affordable, comfortable and classic wardrobe staple. The shorts’ unisex appeal was a major trend of the 1990s. They were popular among men and women alike and were a key part of the “unisex” fashion of the time.

The ’90s was a decade filled with iconic fashion looks. Denim shorts and leather jackets ruled the era, and they were paired with leather jackets and chunky belts. The era also saw the rise of “grunge” fashion, with many stars adopting it as a means to express their individuality.

The ’90s were a decade full of vibrant colors, funky patterns, and easy-going grunge style. The fashions of this decade also included the iridescent club kid look reminiscent of the MC Hammer video.

The Schoolgirl look is iconic. It’s worn by Cher Horowitz in the hit TV show Gossip Girl, and is a staple of many private schools. It is also a popular style amongst many European countries. Typically, this style includes pleated skirts, white socks, and loafers.

Many current trends began during the ’90s. Favorites of our parents’ generation, such as mom jeans, varsity jackets, and leather blazers, have returned. Celebrities have also channeled their inner Cher Horowitz. Kourtney Kardashian embraced the energy of the ’90s with a Rachel-inspired haircut, and Billie Eilish has been seen sporting a varsity jacket and a pair of jorts.

To complete the look, add a denim jacket with snap closures at the front. You can also wear glittery jelly shoes to complete your look. For the pants, choose dark-colored wide-bottom jeans. If you’re wearing a turtleneck top, go for a loose red one.

In addition to a plaid-printed sweater, you can try a pleated skirt. This look will reflect the 90s fashion trend, and can work with a leather jacket or a simple sweater. You can also use an oversize sweatshirt to make your outfit sportier. Choker necklaces and biker boots were also popular during this era.